You're at: Home > News > Commander Riverine Group One Takes Delivery of Floating Dock by Jet Dock 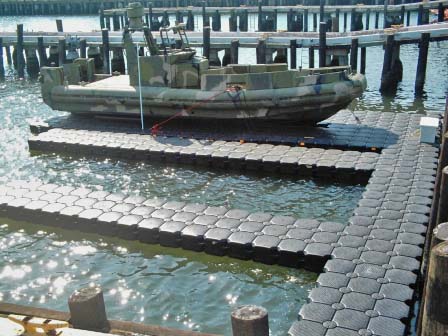 In addition to the dry-docking system, the Riverines purchased multiple wet slips for their location.  Based on the varying craft that the Riverines will be using at this site, they needed the flexibility of the wet slips.  By combining the two Jet Dock interfaces at one location, the Riverines are now ready for any craft or training exercise they may have.
The RPBs are 40 ft. long, 880 hp jet driven craft that are designed for river combat.  The craft can travel at up to 38 knots even with full armor.  These vessels are operated by Navy Riverine Detachments trained specifically for river patrols in combat zones.
Create Your Own!

By answering a few quick questions we will be able to tell you which dock or boat lift is the perfect fit for you.

Start Now! ▶
Tools
How to Order
Talk to a knowledgeable JetDock representative today! call 800-538-3625
Find Your Boat Lift
Not sure which boat lift is right for you? Use our online tool. find Your Boat Lift
Lifts By Location
Not sure if a Jet Dock will work in your location? Check out our capabilites! view Lifts by Location
Knowledge Center
Knowledge is power! Read all about JetDock and make an informed decision. knowledge center
Marine Forecast
Before you hit the water check the forcast in your area! view Forecast
Copyright © 2022 High Performance Boat Lifts by Jet Dock
Jet Dock® is a registered trademark of Jet Dock Systems, Inc.